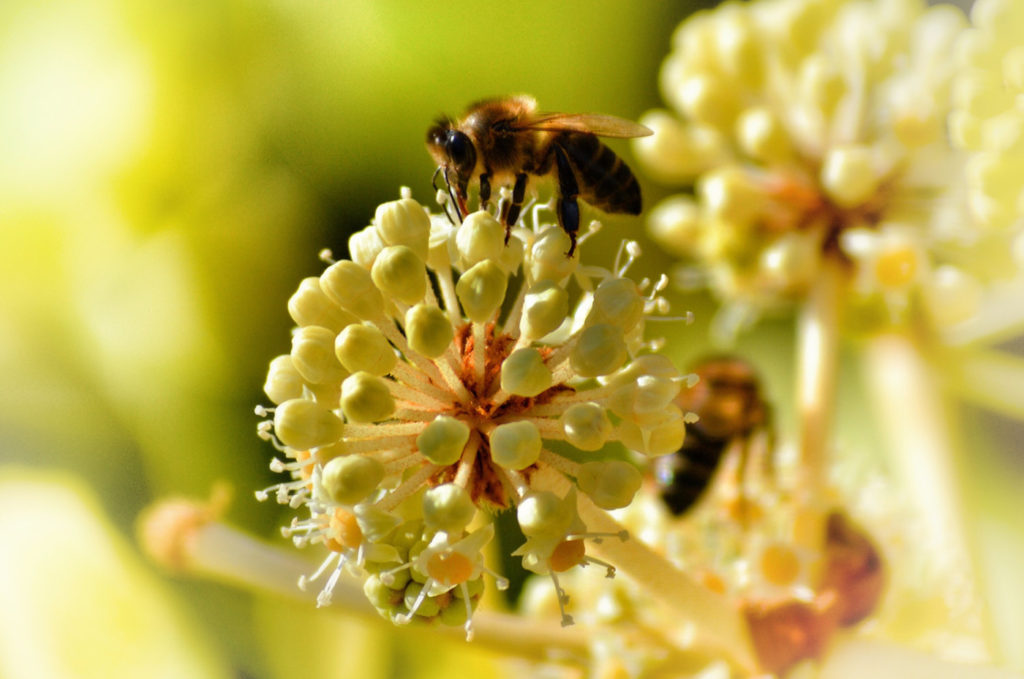 Did you know August 19th is National Honey Bee Day? Since 2009, one Saturday each August has been designated as such….and with good reason! By now, most people have heard of the decline in the honey bee population. But they may not know why it’s happening or what it really means. With that in mind, we’ve decided to dedicate this month’s blog post to our fair, fuzzy friends: the honey bees!

Which bees are honey bees?

We’re not gonna lie…we have trouble with this sometimes, too. While honey bees are probably most often confused with yellowjackets, they’re frequently mixed up with bumblebees, wasps, and hornets, as well. We get it—when anything with a stinger is flying around your face, you don’t typically stop to identify the culprit…. You run! But killing a honey bee or its hive could have drastic effects on our way of life, so it wouldn’t hurt to know which insect is which.

Honey bees are the guys most people think of when they think of a bee. They’re medium-sized and slender, with a pointed abdomen and lots of pretty yellow stripes. Bumble bees, on the other hand are typically much larger, rounder, and fuzzier, often with blocks of color, rather than stripes.

Wasps are typically much more aggressive than bees, and where honey bees have a bit of fluff around their head and thorax, wasps are shiny and smooth, with narrower waists and abdomens. Yellowjackets and hornets are actually types of wasps, and yellowjackets are often the villains that go after and sting humans. They look much like honey bees, with similar coloring and striping, so are often confused with their gentler cousins. When a honey bee stings, however, its barbed stinger is ripped out of its body, effectively killing it. Therefore, they tend to sting only as a last resort.

Why are honey bees important?

It’s estimated that 1 in every 3 bites of food you take has benefited directly or indirectly from honey bee pollination. We rely on honey bees to pollinate not only the fruits and vegetables we eat, but also the seeds and grains used to feed livestock. We depend on pollination by honey bees to feed us, so if they disappear…well, we’d be in a very bad state. Without the industrious honey bee, farming practices would have to change radically, and food prices would soar.

Bees and bee products are also important to the health industry. Antibiotic treatments that include honey are used to treat burn victims, and bee sting apitherapy can be used to treat arthritis. There are even studies in the works investigating the use of bee venom in cancer treatments.

What’s happening to the honey bees?

For several years, now, we’ve been hearing about the baffling decline of the honey bee. Much of this is due to a phenomenon called colony collapse disorder, or CCD. CCD occurs when the majority of the worker bees in a colony disappear, leaving behind the queen and a few nurse and immature bees—without these worker bees, the survival of the hive is doomed. This isn’t a new phenomenon, by any means, but the drastic rise in the number of cases of CCD since 2006 is what has led to such concern.

We still don’t know exactly what causes CCD, but there are several suspects. Disease and infections, climate change, loss of habitat, malnutrition, parasites, and pesticides have all been cited as potential threats to honey bee colonies. A recent study conducted in Europe suggests certain insecticides could be responsible for harming already weakened hives.

What can we do to help?